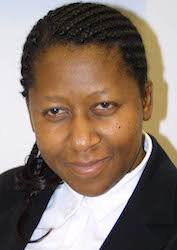 Esther George is the lead cybercrime consultant for the Global Prosecutors E-Crime Network (GPEN) which is part of the International Association of Prosecutors. Esther is also an independent cybercrime, cybersecurity and digital evidence consultant.
Esther initiated and designed the Global Prosecutors E-Crime Network (GPEN) which enables cybercrime prosecutors around the world to learn and benefit from sharing information, experiences, and strategies with each other, resulting in enhanced international cooperation. Esther designed and was one of the tutors on GPEN’s first e-crime training seminar involving 16 Caribbean countries held in Bermuda in August 2009. In 2010 Esther received a Certificate of Merit from the International Association of Prosecutors for being the Architect of GPEN.
From January to May 2016 Esther was Director, Cybercrime and Prevention (Consultant) at 8 MAN an access rights management consultancy which specialises in protecting companies from unauthorised data access. From May 2014 to April 2017 Esther was an Honorary Researcher with Lancaster University, UK. Esther has since April 2014 worked as a cybercrime consultant with organisations such as the Council of Europe, the European Union United Nations and Commonwealth Secretariat.. Esther is a Council of Europe cybercrime expert and regularly travels abroad to train judges, prosecutors and law enforcement.